中文 (繁體)
Located in Tohoku, surrounded by Akita, Miyagi, and Aomori, Iwate is the second biggest prefecture in Japan, after Hokkaido. While size-wise it’s impressive, it’s not an area known for really tooting its own horn. In 2011, this area, along with other parts of Tohoku was torn apart by the Great East Japan Earthquake, but tragedy is not what defines this abundant prefecture.

Iwate is an unforgettable place. It’s a land of simple pleasures, sportsmanship, incredible design, great food, untouched natural delights and one of the most inspiring modern histories in the country. Let’s get to know what makes Iwate one of the most exciting destinations in northern Japan.

POSTED on 2019.09.12
Venturing Further across the map of Iwate
Day2 Morning『Oigen Shop Ironware』 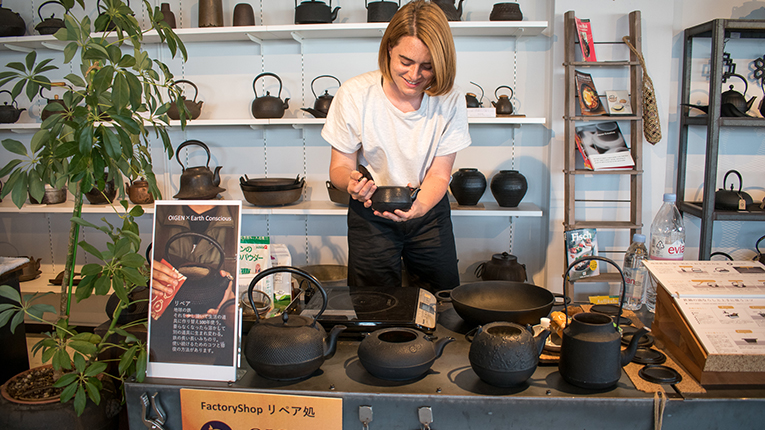 Situated a 10-minute walk south from Mizusawa Esashi Station in the southern city of Ōshu, sits Oigen Shop Ironware. Iron plays a major role in the development of Iwate, and Ōshu specifically garnered a reputation for its Nambu Tekki. It’s a high-quality iron which was used and sold by Japanese lords over four centuries ago. Over time, the role of ironware has both influenced the nation’s culinary and design scene quite unlike any other material.

As designs, aesthetics, diets, and sources for procuring iron change over the years, rustic, long-serving iron has done the same. Oigen Shop Ironware, which sits adjacent to its sister factory, is an excellent place to learn about both the history of Iwate iron, and its contemporary, innovative uses. 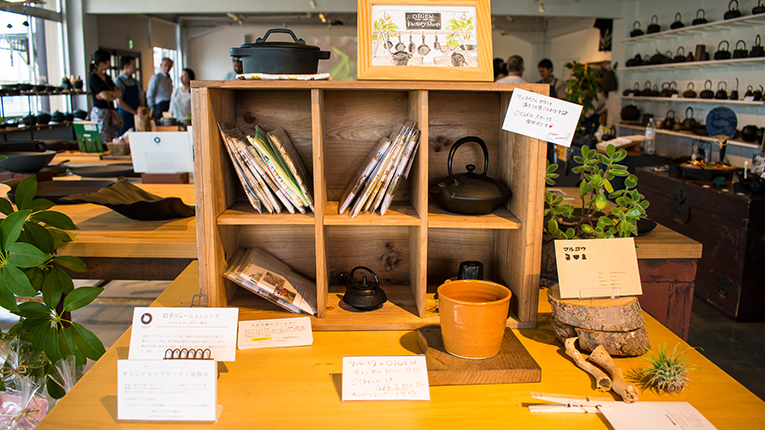 Oigen is just one of a family of ironware hubs which have set up home along the waters of the Kitakami River and the towering peaks of the iron-rich Kitakami mountains. The Oigen family name has been synonymous with iron manufacturing for over 160 years; in fact, it’s still run to this day by a descendent of the founder, Genjuro. 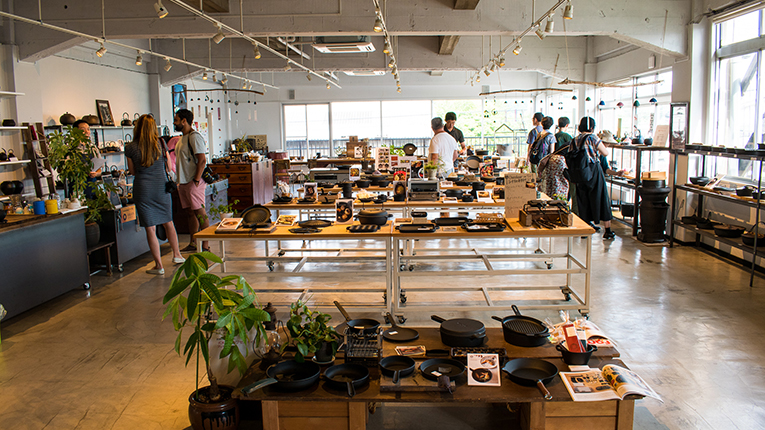 The stylish, contemporary store showcases how iron can be the effective meeting point between both form and function. The store stocks design that have been around for almost have a century, but as a company, Oigen is proudly “not afraid of taking chances.” They’ve been known to ‘make deviations to the so-called traditional Nambu Tekki style.’

With one foot in the past and the other firmly planted in the future of design, Oigen is a comprehensive look at the influence of iron on Japan and broader Asia. It’s also an excellent place to pop by and pick up some one-of-a-kind gifts for yourself or design-loving friends back home.

Just a three-minute walk from Tono Station on the JR Kamaishi Line sits Tono Brewery, which is much more than just a humble brewery. Part tap house and restaurant, this local hangout opened in May 2018, but it’s quickly become one of the modern culinary highlights of the area. 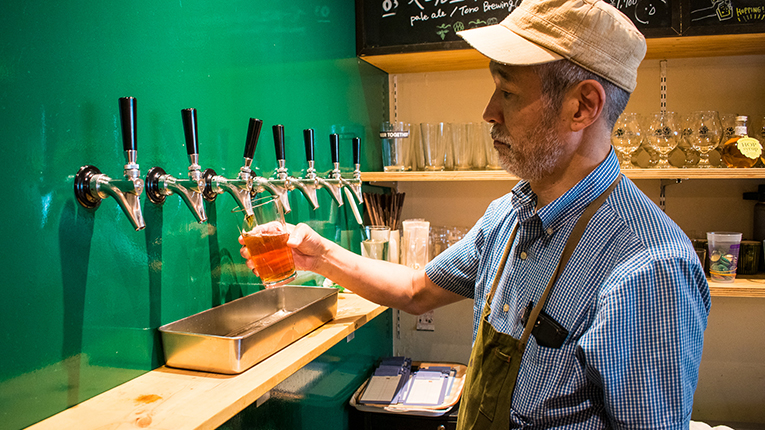 This friendly micro-brewery is spearheaded by Mutsumi Ohta, who is a retired mathematical engineer with a PhD to his name! Before embarking on his beer endeavor, Mutsumi Ohta put his research skills to good use, visiting over 30 breweries from across the nation to learn more about the process. He even trained his brewing and pouring skills at three of the breweries he visited. With such a meticulous master at the helm, you know the beer at Tono is always premium stuff. 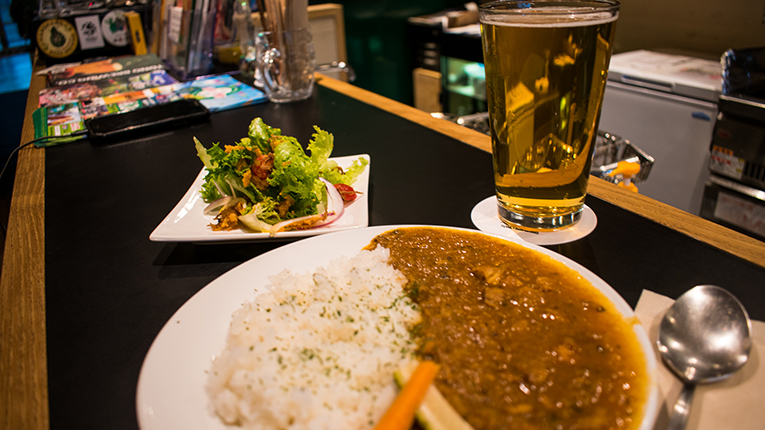 What you drink is made onsite in the compact brewery located at the back of the establishment. You can see all the action for yourself through the floor to ceiling glass windows. In complement to the beer, Tono Brewery also serves some top quality meals and drinking snacks including curry, sausages, salads, and potato fries.

The beer of Tono Brewery utilizes the natural water of neighboring Mt. Tono in the beer-making process. This ensures that the taste of the Tono brew is always fresh and unique to the area. Tono is an town prime for growing hops, and it’s boasted the largest hop production in Japan for the past 50 years. Now thanks to Tono Brewery, the area is in the midst of a transformation from hops production town into a vibrant beer community. 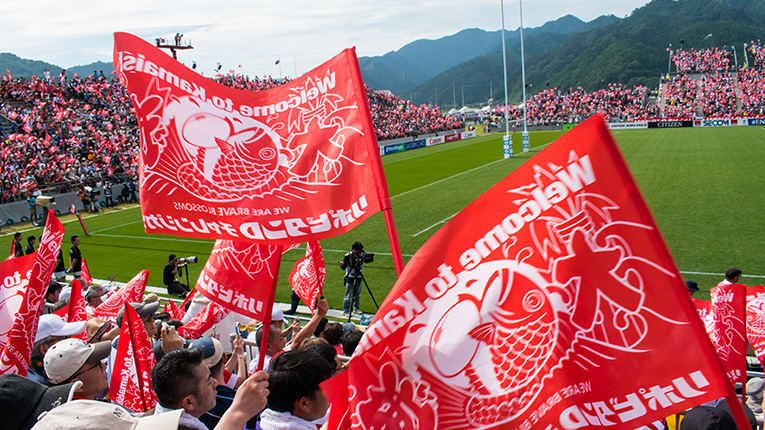 Along the Kamaishi coast, a two-minute walk from Unosumai Station sits the Kamaishi Unosumai Memorial Stadium, the unofficial symbol of the city.

In March 2011, Kamaishi was devastated by the Great East Japan Earthquake. The earthquake and subsequent tsunami claimed the lives of 993 people in Kamaishi and left another 152 unaccounted for. While eight years have passed, and a lot of the hard cleanup work has been done, the memories of the event still linger strong in the minds of Kamaishi locals. But stronger than the pain and hardship Kamaishi citizens have faced, is the bravery and resilience shown throughout the city. It’s an ideology woven into their can-do attitudes, and the physical embodiment of this quality is seen in the Kamaishi Unosumai Memorial Stadium and Memorial site. 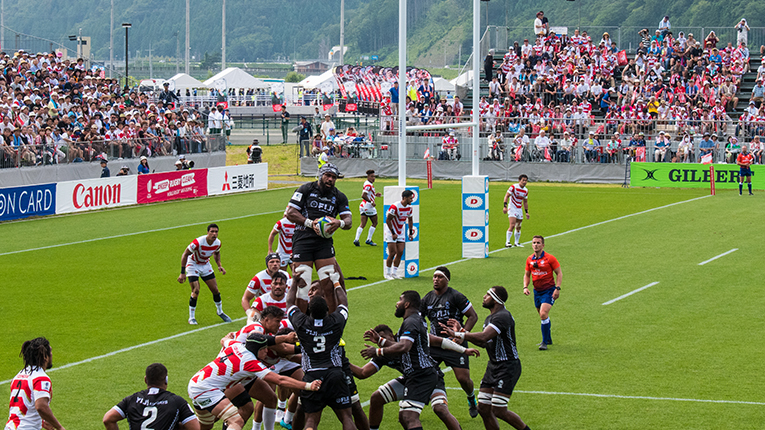 Just a few years ago nothing existed on this site, just a barren space surrounded by the densely forested mountains. Before the tsunami, it was home to local elementary and junior high schools, which were demolished by the torrential waves on that history-defining March day 2011. Luckily, during the disaster, nobody was hurt on this site, as the students had managed to escape to higher ground, making this location what the locals call home to the ‘Miracle of Kamaishi.’ 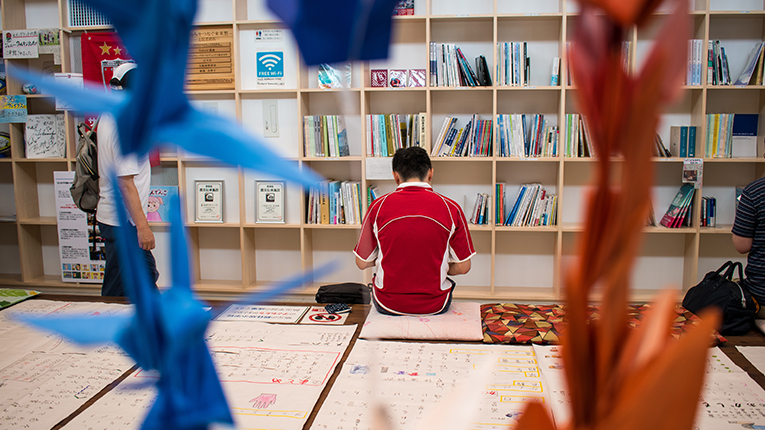 Although its population is humble, less than 35,000, Kamaishi has long been known as one of the nation’s premier rugby cities. During the 1970 and 80s, the town’s much-loved team; the Seawaves won seven straight national championships! It made sense then that this would become one of the host cities for the 2019 Rugby World Cup, which kicks off in September.

The 16,000 capacity stadium is easily one of the most beautiful in Japan, if not the world. Its innovative design makes it feel both much more open and simultaneously more intimate than your regular city stadium. 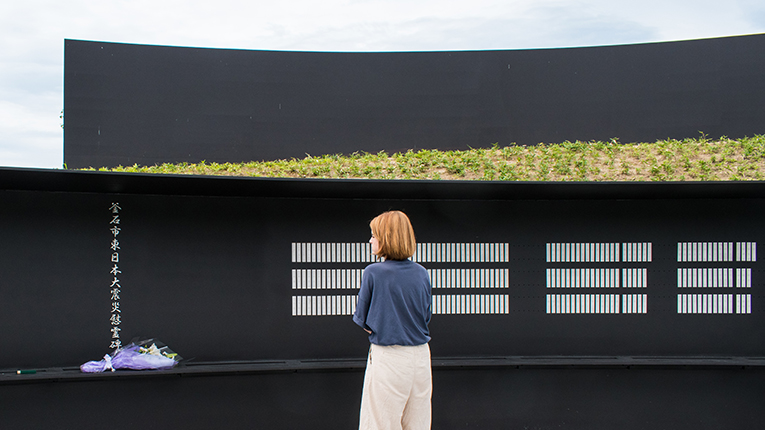 A 10-minute stroll from the stadium sits the Kamaishi Memorial Park. It’s a sobering reminder of the recent history, but more than that, it’s a showcase of how far Kamaishi has come and how much this city has to offer. If you get a chance to catch a match in Kamaishi, whether for the World Cup or some other tournament, don’t miss it. Watching a game here is far more than just a sports match; it’s the inspiring embodiment of Iwate’s can-do attitude and strength. 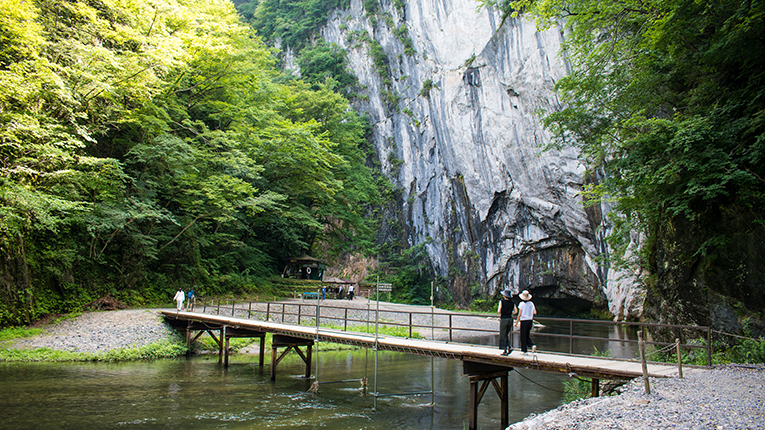 A few minutes from Geibikei Station on the JR Ofunato Line, Geibikei Gorge is the name given to the rugged cliff faces that flank the Satetsu River, one of Iwate’s major waterway arteries and one of the most scenic locations in the northern side of Honshu.

Running two kilometers in length, and 50 meters tall Geibikei Gorge got its name from the Japanese word for ‘lion’s nose’ (Geibi). This is a reference to one of the area’s most popular sights, a naturally crafted limestone that’s said to resemble the silhouette of its namesake.

It’s a popular sightseeing destination for domestic tourists, but relatively untouched by international guests, which is a great part of its charm. 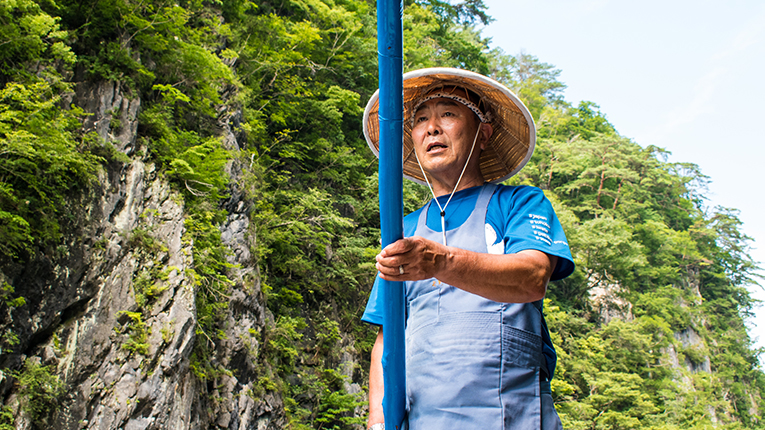 Most people flock here to take a cruise down the river one of Geibikei’s iconic flat-bottomed boats. Powered by a solo boatman with a pole, this 90 minute makes a half-way stop along the water where you can get out, explore the area up close and try your luck with some local “undama” or “luck stones.” Across the river from the stop off point is unmanned stand selling “undama” stones which cost 100 yen for five. Pick some up and try to throw them in the hole marked on the gorge wall across the river. If you manage to get a stone in the hole, it’s said good luck will come your way. 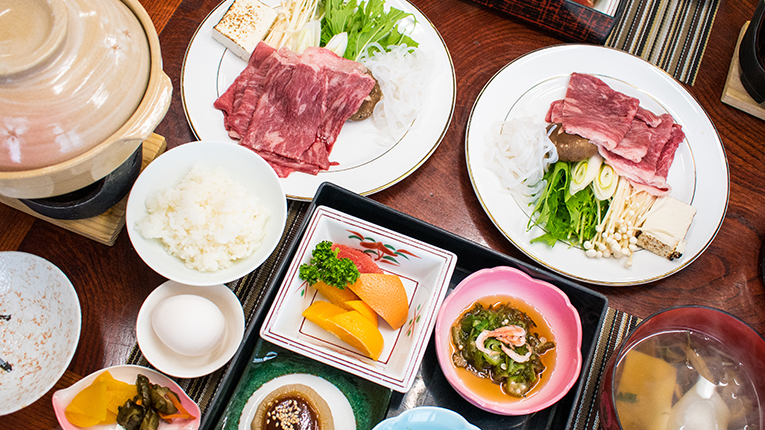 After you’ve taken a cruise and marvelled at the unrefined beauty of Iwate’s landscape, stop by Geibikei Resthouse for some hearty local fare. Head past the souvenir shops and you’ll find the charmingly worn-in guest house which serves traditional Japanese set-style lunches that are diverse, healthy and delicious. From sukiyaki and sweet fish to vegetarian sets they have all the bases covered. You can also pick up a bento lunch box from the store to enjoy on the boat. 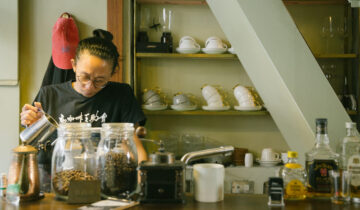 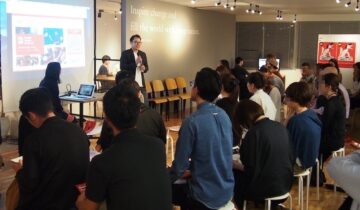 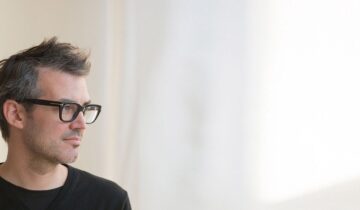